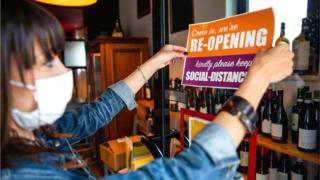 Shops with on-street access and some workplaces such as factories are reopening following an easing of Scotland's lockdown.

Small weddings and civil partnerships can now be held outdoors and zoos and safari parks will be able to reopen, but only to visitors who live nearby.

The easing of restrictions is the first time many stores will have had customers since the Scottish government lockdown came into effect on 23 March.

Playparks are also being reopened.

Monday's easing of the rules forms part of phase two of the Scottish government's "route map" out of lockdown .

Further restrictions are due to be lifted later this week.

Stores of all sizes can reopen - but only if they have outdoor entrances and exits.

Indoor shopping centres must remain closed for now, except where they contain essential shops.

'Not the Boxing Day sales'

Scotland's national clinical director Prof Leitch said: "I look forward to people going to the shops and supporting local businesses, but I want them to do it with face coverings, with physical distancing, with taking patience, so they only go into the shops when there's room to do so.

"I think people now understand the nature of what shop opening means.

"It is not back to normal. This is not the Boxing Day sales."

Economy Secretary Fiona Hyslop said the reopening of shops was a "significant step" towards the recovery of the economy, which had been "severely hit".

"As the high street reopens, we are making it clear shoppers are welcome back to their local high street as long as they shop safely and observe key safety messages such as the wearing of face coverings."

Healthcare premises such as optometry practices are also now able to see patients face-to-face for emergency and essential eye care.

Many practices have continued to provide remote support for patients during lockdown and throughout phase one, but will now be able to start seeing patients again in person.

Factories, warehouses, laboratories and research facilities are among workplaces that can reopen, provided guidance on social distancing measures are in place.

But non-essential offices and call centres have to wait until phase three before they can reopen to staff.

Image caption Playparks have been closed since the end of March

It is now also possible to go to outdoor sports courts and children's playgrounds.

Outdoor visitor attractions such as zoos and safari parks, along with gardens can reopen, but for local access only - "broadly within five miles" - until a further easing of restrictions expected in early July.

The Royal Zoological Society of Scotland (RZSS), which owns Edinburgh Zoo and the Highland Wildlife Park, along with the owners of Blair Drummond Safari Park near Stirling, had been calling for a reopening date before the end of June.

The safari park said the months-long closure had "pushed it towards a financial cliff" .

RZSS had warned that missing the start of the summer season could see it lose a total of £500,000 in funding for its sites within five weeks - £400,000 at Edinburgh Zoo and £100,000 for the Highland Wildlife Park near Aviemore in the Cairngorms.

David Field, RZSS chief executive, said the society was "thrilled" to be able to reopen its attractions.

He said: "Safety comes first and it is important everyone follows the government guidance to protect themselves and others.

"At the moment, current guidance asks everyone to stay within their local area and defines this as broadly within five miles.

"We are pleased to hear that from 3 July the travel guidelines may be relaxed to allow people from further afield to visit too."

And restrictions on moving house have also been relaxed.

A SIMPLE GUIDE: What are the symptoms? RISK AT WORK: How exposed is your job? HOW A VIRUS SPREADS: An explanation RECOVERY: How long does it take to get better?