Coronavirus: School exams set to be held again in 2021 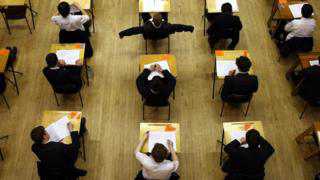 School exams are set to be held again next year, Education Secretary John Swinney has said.

In a Q&A with the National Parent Forum of Scotland, Mr Swinney announced that current plans were to hold a full exam diet in 2021.

School exams were cancelled this year due to the Covid-19 pandemic.

Teacher predictions were moderated by the SQA, resulting in a methodology that disproportionately affected pupils from deprived backgrounds.

A week after results were sent out, Mr Swinney announced that grades would revert back to original teacher predictions.

Compared with the moderated results, these increased by 7.8, 10.3 and 5.5 percentage points respectively.

On Thursday night, Mr Swinney told the National Parent Forum of Scotland: "Our objective is to run a full 2021 exam diet.

"SQA have consulted on what steps they could take to reduce the burden of assessments before the exam diet - what elements could be removed.

"We've also looked at the timetable of exams. Do they need to start in late April? Could they start at the end of May, giving them an extra month for learning and teaching."

He said the SQA was considering its response.

'Fair crack at the whip'

Mr Swinney added that his main priority was fairness, saying: "I can't foresee how much disruption there will be between now and next spring, either on individual, class or school level.

"I am determined to ensure every student has fairness and a fair crack at the whip next year, no matter their experience."

Mr Swinney also apologised again for the "stress and anxiety" caused by the moderated grades.

He said: "When it became apparent there were a number of unfair outcomes, I took the decision to direct the SQA to base exam results on the basis of teacher estimates, to recognise the challenges pupils faced.

"I recognise that it caused a lot of stress and anxiety on young people and I reiterate my apology for that.

"We didn't want to cause that stress and for that I unreservedly apologise."

The SSTA teaching union has already called for next year's exam diet to be cancelled .

And the largest teaching union, the EIS, has previously argued that some students should not sit exams next year - such as S4 students who intended to continue with a subject in S5.

RISK AT WORK: How exposed is your job? SCHOOLS: When will children be returning? EXERCISE: What are the guidelines on getting out? THE R NUMBER: What it means and why it matters RECOVERY: How long does it take to get better?