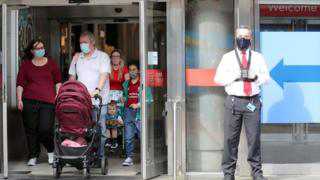 New Covid-19 restrictions for parts of Northern Ireland, including Belfast and Ballymena, have caused "confusion", MPs from the affected areas have said.

"We can't close our country down because of Covid," Mr Paisley said.

South Belfast MP Claire Hanna said she supported moves to curb the spread of Covid-19 but called for more clarity.

"It's very, very important that we're clear with people because even people who are trying, with the best will in the world, to engage are getting confused by some of the messages," Ms Hanna added.

What do the new rules say?

People living in the Belfast council area, Ballymena town and postcode areas BT43, BT28 and BT29 have been advised against making non-essential journeys outside the affected zones.

There are also new social restrictions - residents in these areas cannot visit other households, although there are a number of exceptions under which home visits are allowed.

Hospitals and care homes in the affected areas will also be advised to limit visitors, with one family member being allowed to visit once a week.

Gatherings in private gardens will be limited to six people or fewer, from no more than two households.

The localised restrictions were announced by Northern Ireland's first and deputy first ministers at a joint news conference on Thursday.

First Minister Arlene Foster said the "villain is not in businesses where numbers of customers are regulated".

"It's is in our homes - it is the house party, it is the dinner party - it is the few people coming around for drinks or coffee," she added.

Speaking on the BBC's The View programme a few hours later, her DUP colleague Mr Paisley said: "We don't have clarity.

"I sit on a town centre management group - they've been completely blindsided by this and they don't know what's happening."

Ms Hanna told the same programme that ministers were acting in "good faith" and there was "no easy way" to introduce complex regulations at a time when the public was "very weary" of Covid restrictions.

"It's important that we refine them and that all the information is available so that people know whether or not they can go in and out of work and the support packages that are going to be there because this will still affect some businesses," she said.

"Are we saying you can open but your customers are being told they are in a hotspot - is there going to be support?"

The first and deputy first minister outlined the restrictions as they led their first joint press conference together at Stormont for 73 days.

They had stopped sharing a platform after the controversy surrounding Ms O'Neill's attendance at a funeral in June, despite Covid-19 restrictions .

Ms Hanna said she believed their message came out "a little bit confused" and speculated it may have been rushed out due to expectations of the pair appearing at a "reunion" press conference.

"Ultimately, we've got to disrupt the chains of transmission and that's what the executive are trying to do and I think we're all behind them in doing that," the SDLP MP added.

Mr Paisley agreed ministers were currently facing their "trickiest" challenge in trying to find a "middle line" where they can protect public health as well the economy.