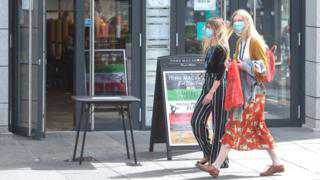 A new law has come into force limiting social gatherings in Scotland to a maximum of six people from two households.

The changed rules apply both indoors and outdoors - including in homes, gardens, pubs and restaurants.

Until now up to eight people from three homes were allowed to meet indoors, and 15 from five households outdoors.

Children aged under 12 will not count towards the total in the "rule of six" in Scotland.

The move to cut the number of people who can meet follows a similar move announced for England .

What does the rule of six mean for me? What are the latest lockdown rules in Scotland?

However more than 1.75m people in Scotland are subject to even stricter restrictions as a partial local lockdown is in force in the greater Glasgow area.

People in Glasgow city, Lanarkshire, East and West Dunbartonshire, Renfrewshire and East Renfrewshire cannot meet other households at their own homes, following a spike in cases.

Police Scotland said it would enforce the law if required.

Deputy Chief Constable Malcolm Graham said: "The chief constable has made it clear that we are asking people to take personal responsibility to do the right thing and remember the purpose of these measures is to aid the collective effort to stay safe, protect others and save lives by preventing the virus from spreading.

"Our officers will continue to engage with the public, explain the legislation and guidance and encourage compliance.

"We will use enforcement as a last resort where there is a clear breach of the legislation."

There will be "limited exceptions" to the rules for organised sports, places of worship and wedding and funeral services - which will be capped at 20 guests.

It has also become mandatory for staff working in hospitality premises such as pubs and restaurants to wear face coverings, and for customers to wear them while moving around.

The changes follow an increase in the number of coronavirus cases across the country in recent weeks.

There were over 200 cases reported on both Saturday and Sunday - with the daily count reaching their highest level since early May.

However, there were far fewer tests being carried out back in May meaning many people with the virus did not appear in the statistics.