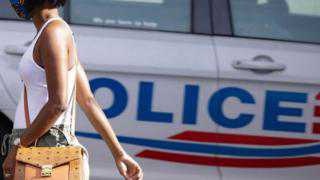 Roderick Walker, 26, was a passenger in a car that was pulled over by deputies for an alleged broken rear light.

After an altercation, police tried to arrest him.

In a statement, Clayton County Sheriff's Office said "the deputy who repeatedly struck Roderick Walker" was to lose his job "for excessive use of force".

How are African Americans treated under the law?

A criminal investigation has been turned over to the district attorney's office, the statement added.

The incident, which happened on Friday near the Hartsfield-Jackson Atlanta International Airport, comes amid heightened tensions in the US over racism and police brutality.

Mr Walker's lawyer, Shean Williams, said his client had been a passenger in the lift-share car with his girlfriend, their five-month-old child and his stepson when police pulled them over.

Mr Walker became upset when he was asked for his identification as he hadn't been driving the car, Mr Williams said in a statement quoted by ABC News.

"He informed them that he did not have any ID and that he didn't need any since he was not driving a vehicle," he said.

"When they didn't like his question, they then demanded that he get out of a vehicle that he wasn't driving. It escalates to him being beaten on the ground, being tased, and almost dying. And they take him to jail."

In footage of the arrest, a child in the car yells "Daddy" and Mr Walker's girlfriend screams. One of the deputies says Mr Walker bit him.

Mr Williams said that his client lost consciousness at least twice during the arrest and denied biting the deputy.

A photograph of Mr Walker taken later in custody shows him with a swollen left eye.

"My reaction to the video is that it just shows, unfortunately, another incident where an African American male's civil rights have been violated by people and officers and law enforcement who have the duty first to protect and serve," Mr Williams said.

His family and his lawyers are pressing to have him released from jail.

In recent months the US has been grappling with the treatment of African-Americans at the hands of the police, as well as wider questions about racism in society.

Debates were triggered by the death in police custody in Minneapolis of another black man, George Floyd, in May.

His death sparked protests around the country, and abroad, and has ignited calls for police reform in the US.