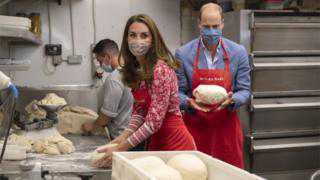 Image copyright PA Media Image caption The bakery makes thousands of bagels every day, not all of them made by royals

Beigel Bake in London's East End is used to welcoming hungry clubbers and shift workers through their doors, less so members of the Royal Family.

But on Tuesday, the Duke and Duchess of Cambridge paid the famous 24-hour bakery in Brick Lane a surprise visit, rolled up their sleeves and got baking.

The couple heard how the shop had been forced to reduce its opening hours during the coronavirus pandemic.

They were also told how, despite that, the shop had donated food to locals.

In a day touring the East End, William and Kate also travelled to the nearby East London Mosque and London Muslim Centre in Shadwell.

There, they chatted to volunteers who cooked and delivered meals to vulnerable members of the community during the pandemic, and dropped off medicines or groceries.

The duke and duchess also met some of those who had benefited from the support of a project which has received financial help from the National Emergencies Trust - which has William as its patron.

Earlier in the day, the royals spoke to a group of unemployed people at the London Bridge Jobcentre, who lost their jobs in the pandemic and are now getting support to get back into work.

Employers also spoke about their experiences trying to help people find jobs during the outbreak.

Image copyright PA Media Image caption The duchess is a fan of TV cook Mary Berry, and likes cooking with her three children