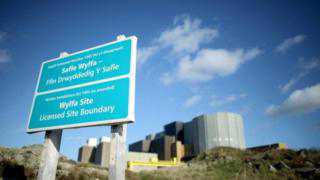 Plans to build a £13bn nuclear power plant in Wales have been scrapped.

Work on the Wylfa Newydd project on Anglesey was suspended in January last year because of rising costs after Hitachi failed to reach a funding agreement with the UK government.

Isle of Anglesey council said the company had now confirmed in writing it is withdrawing from the project.

Council leader Llinos Medi said: "This is very disappointing, particularly at such a difficult time economically."

Developer Horizon Nuclear, which is owned by Hitachi, said it would not comment.

However Anglesey council said it had received a letter from the Tokyo-based electronics company confirming its decision.

Donald Trump plea over Wylfa nuclear project sale dismissed Wylfa Newydd and the energy gap What's Wylfa - and why is it so important?

Mrs Medi has asked to meet both the Welsh and UK governments to discuss the future of the site.

A two-reactor plant at Wylfa was the biggest energy project ever proposed in Wales.

It was earmarked as having the potential to power up to five million homes , but the project was put on hold as the upfront costs rose.

With 9,000 workers ready for the construction phase, the decision in January 2019 was described as "a tremendous blow" to the Welsh economy by business leaders.

The company said in June it was hoping to secure extra funding from the UK government to resume the project but has now thrown in the towel.

The company behind it, Hitachi, has always been concerned about the costs of building the new nuclear power plant.

The UK government went some way in offering financial support to the project but it wasn't enough to satisfy Hitachi's concerns over the financial risks.

The UK government also held a consultation on plans that would see energy customers pay upfront for the costs of construction.

The industry has been waiting for months for an outcome to that.

When the UK government said nuclear was part of its push for green energy, the industry thought it was a positive sign for Wylfa Newydd.

But critics question how green nuclear energy really is, not to mention how safe it is.

Wales has been called the 'land of artists' impressions' with many big schemes that are talked about and never happen.

Supporters of Wylfa Newydd will be concerned it will become another of those, while its critics would be glad to see the back of the plans.