Coronavirus testing: 'Gething should get a grip' 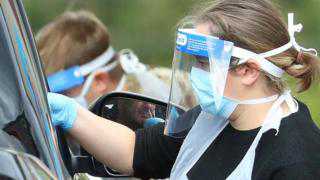 Wales' health minister should "get a grip" on coronavirus testing, a Plaid Cymru member of the Senedd (MS) and GP has said.

People trying to get tests have spoken of their frustration over the length of time to book and distance to travel.

South Wales West MS Dr Dai Lloyd said Vaughan Gething had "opted into this UK system" so "can't say 'it's not my fault, it is all down to UK'."

Dr Lloyd, who is chair of the Senedd's health committee, suggested a system where people book a Covid test through their GP rather than online.

He told Claire Summers on BBC Radio Wales he was "extremely concerned because we seem to seeing a resurgence now of the virus".

When asked if GPs would be better running the system he said: "I think so, basically... as a public service, you have an issue, you go and see your GP, she or he sorts out the test, he or she sorts out the result and sorts you out.

He added: "It's a very complicated new private system overlaid on top of our usual NHS provision…

"Its impossible as opposition politicians to scrutinise exactly what's going on because everyone says it's someone else's fault."

On Monday, one testing site in Abercynon, Rhondda Cynon Taff, reportedly ran out of kits.

An official at the site told BBC Wales it had closed for a few hours while they fetched more tests from Swansea.