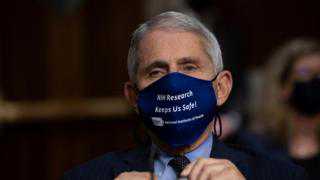 Image copyright Reuters Image caption The clip appeared to show Dr Fauci talking about President Trump, but he was talking about himself

Top US government scientist Anthony Fauci has said an edited clip of him used in a Trump campaign ad is misleading.

It shows Dr Fauci saying he "can't imagine that anybody could be doing more" to fight Covid-19, suggesting he is speaking about President Trump.

However, Dr Fauci was talking about himself and other medical officials.

The infectious diseases expert has previously clashed with Mr Trump over how to handle the pandemic.

"The comments attributed to me without my permission in the GOP campaign ad were taken out of context from a broad statement I made months ago about the efforts of federal public health officials," Dr Fauci added.

The 30-second campaign ad declares "President Trump is recovering from the coronavirus, and so is America", before playing the clip of Dr Fauci.

However, in the original footage of Dr Fauci, which came from an interview the epidemiologist did with Fox News in March, he says: "I have been devoting almost full time on this. I'm down at the White House virtually every day with the task force. It's every single day. So, I can't imagine that under any circumstances that anybody could be doing more."

In response, Trump campaign spokesman Tim Murtaugh said: "These are Dr Fauci's own words. The video is from a nationally broadcast television interview in which Dr Fauci was praising the work of the Trump administration. The words spoken are accurate, and directly from Dr Fauci's mouth."

President Trump also defended the use of the clip , tweeting: "They are indeed Dr Fauci's own words. We have done a 'phenomenal' job, according to certain governors."

How is Donald Trump doing in the polls? Why are infections rising again in US? Fauci: The face of America's fight against Covid-19

This comes days after Dr Fauci criticised the White House for hosting a gathering last month that has been linked to an outbreak of Covid-19.

He said the Rose Garden event on 26 September, held to unveil President Trump's Supreme Court nominee, was a "superspreader event". At least 11 people who attended later tested positive for the virus.

Mr Trump also tested positive on 1 October, and was hospitalised for three days with the virus. 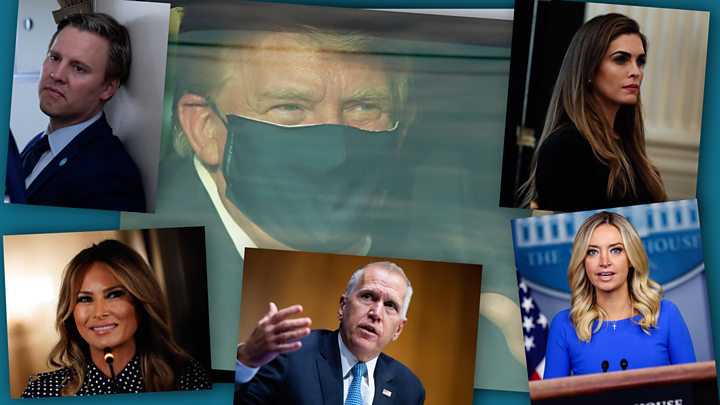 But last week doctors cleared him to hold public events, less than a month before he faces Democratic candidate Joe Biden in the presidential election.

On Monday the Trump campaign is planning a big rally in Sanford, Florida.

Mr Trump has expressed scepticism about measures such as masks and lockdowns to combat the spread of Covid-19, which has killed more than 213,000 people in the US. He has talked up the prospects of a vaccine becoming available, although researchers say this is unlikely to happen before next year at the earliest.

Polling suggests Mr Biden has a single-digit lead over Mr Trump and an ABC News/Ipsos poll found that just 35% of Americans approved of how Mr Trump has handled the crisis.

Who has tested positive in Mr Trump's circle?

As many as 34 White House aides and other contacts have tested positive for Covid-19 in recent days, according to US media, many of them linked to the 26 September event.

On Friday, the Minnesota Department of Health said nine infections had been tied to Mr Trump's 18 September campaign rally in the state.

Did this White House event cause a virus outbreak?

At least one person was infectious when they attended, officials say, and two cases have led to hospital admissions, with one of those people in intensive care.