US election 2020: 'Rigged' votes, body doubles and other false claims 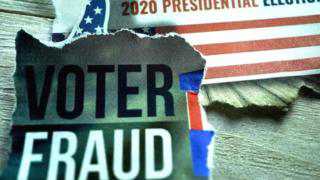 In the final weeks of the US election campaign all manner of false and misleading things are being shared on social media.

Here are some of the most recent - and false - claims.

The Trump campaign has often claimed, without evidence, that increased postal voting ("mail-in" is the American term) due to the pandemic will lead to tremendous fraud.

He repeated the example at a town-hall event on Thursday, when the moderator put it to him that the director of the FBI says there is no evidence of widespread fraud.

The elections board in Franklin County, Ohio, said the ballot error was a "serious mistake" but in its response to the president's tweet, it added: "Our board is bipartisan and our elections are fair. And every vote will be counted."

The error came through a technology malfunction - a high-speed scanner stopped working - that meant a chunk of more than 250,000 absentee ballots, for those not voting in person in their state, sent out were inaccurate.

Everyone affected now has the correct voter slip, the elections boards said, and there are various safeguards in place to make sure no one votes twice.

In September, pictures of ballot envelopes in California were shared thousands of times on Facebook along with further unsubstantiated claims of "vote rigging".

The official County of Sonoma Facebook page published a statement addressing the claims. "The pictures are of old empty envelopes from the November 2018 election that were disposed of as allowed by law," they said.

The county's ballots for this year's presidential election had not yet been sent out to voters when the pictures were shared.

Numerous national and state-level studies show that voter fraud is incredibly rare in the US.

There have been isolated cases of postal-ballot fraud and the FBI is currently investigating a case of nine military ballots that were discarded in Pennsylvania.

But Ellen Weintraub, commissioner of the Federal Election Commission, which oversees campaign spending laws, has said: "There's simply no basis for the conspiracy theory that voting by mail causes fraud."

Do postal ballots lead to voting fraud? How to spot election disinformation

Misleading videos and adverts vilifying opponents, spinning facts and exaggerating the truth are of course common during election campaigns - and this one has been no different.

But the actual question was not about a wholesale ban on guns, but rather on one specific type - assault weapons. Mr Biden does indeed support a ban on the manufacture and sale of those high-powered weapons, and proposes that owners will either be able to sell them back to the government or register them.

The clip and Mr Trump Jr's tweet dropped any such nuance, however.

A Democratic Party-supporting Twitter account published its own video on the issue. Referring to the president's supporters, it claimed: "Hey MAGA, Trump is coming for your guns". Attached was a clip from a press conference in which the president says: "Take the firearms first and then go to court".

But here the president was referring to a policy of removing weapons from the hands of potentially dangerous people.

Misleadingly edited videos have been a recurring feature of the campaign.

This week, a Trump campaign ad was edited to make it look like Dr Anthony Fauci, one of the leaders of the White House coronavirus task force, was praising the president. In reality, Dr Fauci was talking about his own response to the pandemic .

A frequent falsehood includes allegations that the president called coronavirus a "hoax". An ad seen a few hundred thousand times on Facebook this week and promoted by "Color Of Change PAC" - a "political action committee" separate from the political parties - includes the false claim.

While he has at times made wildly unscientific statements, President Trump did not directly call coronavirus a hoax. The rumour seems to stem from a speech he gave earlier in the year, in which he called the Democratic Party's reaction to his handling of the pandemic "their new hoax".

Tweets generating thousands of shares in recent days promoted a bizarre conspiracy theory, claiming to reveal secret information about the capture and death of Osama Bin Laden - an idea that was amplified by the president himself.

An article reporting these unfounded claims eventually entered the mainstream conversation after President Trump retweeted it.

The "whistleblower" in the story claims to have information to prove that a "body double" of Osama Bin Laden was killed by American troops in Pakistan, rather than the real Al Qaeda leader.

The article went even further, with the interviewee accusing Joe Biden of orchestrating a cover-up and the shooting down of a US helicopter in Afghanistan in 2011. They provided no evidence to support the claims.

The accusations prompted fury from a member of the elite Navy Seal unit who took part in the mission. He totally rejected the theory, telling CNN it was "trampling on the graves of some of the best heroes I have ever personally worked with".

The author of the article retweeted by the president admitted on Twitter: "I have no proof that the Whistleblower's claims are true."

At Thursday's town-hall event the president was asked about his decision to retweet the dubious article, and responded: "I'll put it out there - people can decide for themselves."

Mr Trump has promoted conspiracy theories in the past and also became the subject of some when he caught coronavirus.

One particularly far-fetched theory shared on Facebook and Reddit this week claimed that Mr Trump has been replaced by a clone.

A collage of images entitled "The real Donald Trump never left hospital" contrasted photos of Donald Trump before and after his stay in hospital, labelling him a "new-born clone".

Though some people clearly shared the post as a joke, other comments suggested the idea was taken seriously by some.

The president has been seen in public multiple times since his release from hospital, and there is no evidence to support the wild theory.

This isn't the first time a sitting president has been accused of being replaced by a clone during an election campaign.

In 2018 a viral rumour that Nigeria's President Buhari had been replaced by a body double became so widespread that the president himself responded , saying: "It's the real me, I assure you".

Send us your questions