James Collins rued the Republic of Ireland's wastefulness in front of goal as they were held to a 0-0 draw by Bulgaria .

Collins had the best chance of the first half, heading over from close range after great play by Daryl Horgan, and the Luton striker hit the side netting with a volley shortly after the restart.

Ronan Curtis also should have done better when played in on goal by Jason Knight as Ireland's winless run under manager Stephen Kenny extended to eight games. 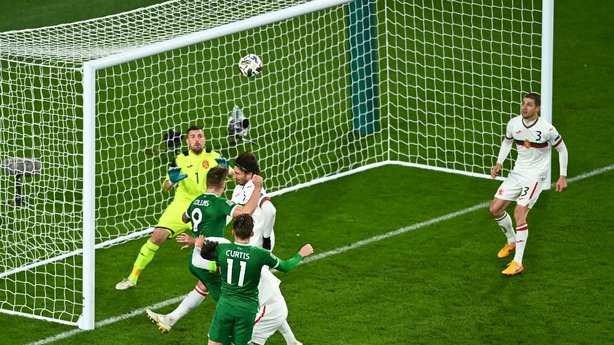 Collins headed over from close range late in the first half

The draw was enough for Ireland to avoid relegation from Nations League B but their failure to win means they will drop into the pot of third seeds for next month’s 2022 World Cup qualifying draw.

Collins told Sky Sports : "We came into the game tonight wanting to win, definitely not lose the game.

"We wanted to win the game and we had the better chances to do that, but we just couldn't break them down.

"But I suppose on a positive note, we haven't been relegated, so that's a bit of good news."