UNBELIEVABLE! In This Tribe, Women Beg Men To Beat Him, Insists He Doesn't Stop Until She Bleeds, See Their Reason 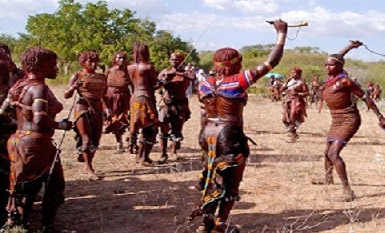 Around the world, there are several things that are being done to violate women and although there are lots of fights supporting the female gender, it seems some women are comfortable with being violated.

No doubt, there are several cultures around the world and although a lot of people find these cultures very weird, the people practicing them hold it in high esteems.

READ: BRUTAL! In This Culture, Women Are Made To Cut Off Their Fingers When This Happens... Find Out The Shocking Reason

One of such cultures is practiced in Hamer Tribe where women voluntarily release themselves to men so that the men can beat them. 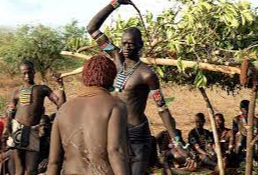 WHO ARE THE HAMER PEOPLE?

The Hamer tribe is in Ethiopia and most of the people there are pastoralists, which is why cattle hold a significant place in their culture. The children of Hamer are being taught from an early age to farm and look after the livestock.

In Hamer tribe, there is something they do which is called Bull Jumping. Bull jumping involves a young boy jumping on the back of seven or 10 bulls four times without falling. This event is usually held in October or November and reports states that this ancient ritual has been practiced for more than three centuries. In hamer, the eldest child has to do before the younger and it is the father or the uncle of the child that would decide when the eldest boy is ready for the bull jump. There is no particular age to it and a child can actually do it as early as the age of 5. 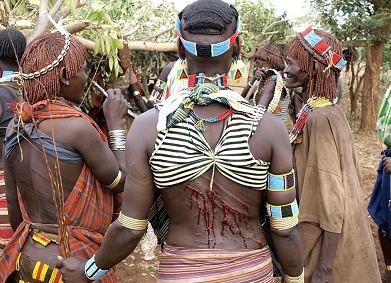 THE ROLE OF THE WOMEN

At the bull jumping, women would then entice the men who are called Mazas to use whips and canes on their backs. In fact, it is said that these women force the men to beat them, and when the men refuse, they insist to be beaten. They would ask that the men continually beat them until blood begins to seep out of their backs and even when this happens, they beg them to continue.

While they are being beaten, the women aren’t allowed to scream or run away from the ceremony. What is expected is that regardless of the pain, they beg the man to keep beating them. 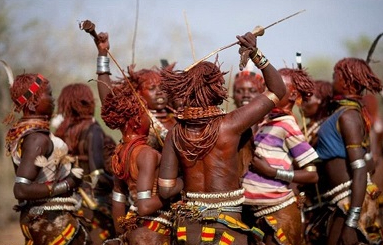 WHY IS THIS BEING DONE?

According to the Hamer people, withstanding the gruesome pain of the beating serves as a dedication of these women to the men. Also, the number of scars on the back also shows the new Maza who loves him best.

Another thing that they say is that they have chosen to take the beating so that the man can remember them when they face difficulties.

Also, it is believed that accepting these beatings would show their love and support man and that later in the future, the scars would give them a right to demand his help in time of need.

The ceremony starts with all the female relatives performing a dance, during which they offer themselves as subjects to be whipped by men who have recently been initiated.

The shocking thing is that even after being beaten severally, they would still stay with the mindset that the greater the pain they endure, the higher the level of loyalty they’re showing to the young boy. In fact, the scars left on their body are a symbol of the loyalty they’re entitled to receive from him.

The elders and men who have performed the ritual before, but are not yet married, gather castrated male cattle for the traditional coming-of-age ceremony. As for the young men, they get naked hair and their hair is partially shaven. 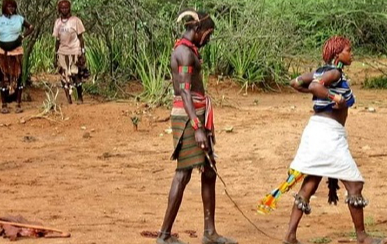 WHAT HAPPENS AFTER MARRIAGE?

For the Hamar women, beating doesn’t end after the ceremony, rather, the man has the right to beat her anytime he likes until she gives birth to her second child. The ridiculous thing is that he doesn’t even have to explain why he is beating her.

Now, here’s the very weird part, the women show off their scars because they see it as beautiful. Despite all they go through, these women are still expected to do all household chores, take care of the children and sow crops as well as keep the cattle.

READ ALSO: DID YOU KNOW? There Is A Place Humans Marry Dogs As A Special Tradition? You Will Be Shocked At Why These People Do It

As for the men, they are allowed to marry more than one woman, but then, the women who are not first wives are treated more like slaves as they are made to do the majority of the work.

A lot of people see this as domestic violence against women but for some reasons, these women seem to love the tradition.

What are your thoughts?